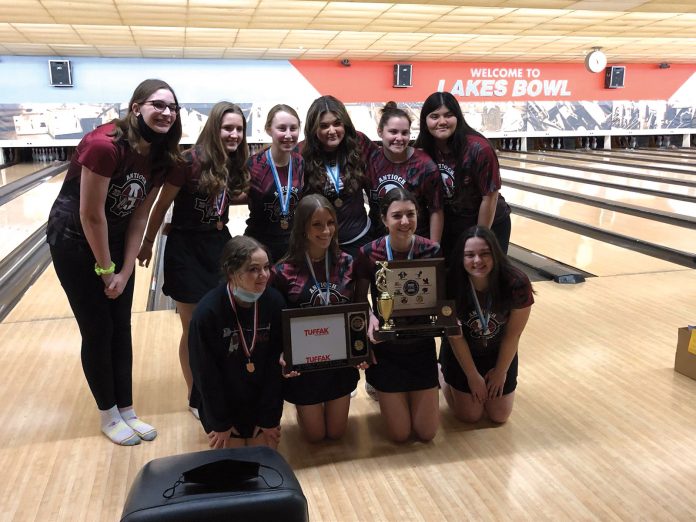 Winter sports are off and running and many are nearing postseason play. We were so thankful to play these sports during their normal seasons this year and are looking forward to a lot of success in the postseason.

Boys’ Basketball
The Boys’ Basketball Team has been strong at home with a record of 6-3 with great support from the student section. Seniors Leighton Costello and Trenton Crandall have provided scoring while junior Emmy Zamudio takes on the ball handling duties as a floor general. Joe Neumann has been a rock on the interior and freshman Marshall Gehrke leads the team in scoring and rebounds. Finally, Nathan Young has been quite versatile this season, playing up to three different positions per game at times, and Kyle Glassman is the heart, soul, and energy of the team.

Cheer
Varsity Cheer competed at 5 invitationals and finished in the Top 3 at every competition, taking 2nd in the NLCC Conference, and taking 1st place at the Grayslake North invitational. At the Fremd Invitational, Varsity took 2nd place out of 19 teams, posting one of the top scores in the state, following an impressive third place finish at Sectionals. JV Cheer just completed their season, finishing Top 4 at every competition this season. At state, the Cheer team placed 3rd.

Girls’ Basketball
Currently the Varsity Girls’ Basketball Team has a record of 9-12. Senior Avery Larson (Truman State bound) leads the team in scoring (11.5 points per game) and rebounding (10 per game). Callie Bemis is 2nd in scoring with 8 points per game, and Ariana Nikolov is 2nd in rebounding with 6 rebounds per game. The team continues to work to improve their skills and knowledge of the game behind the veteran play of Maggie Volkmar, Mia Kaiser, and Campbell Lazarz. Kate Fredrick, Gia Larsen, and Carlie Elizondo bring defensive pressure off the bench, while Demi Lee adds height to the inside game.

Wrestling
The team has several wrestlers ranked in the state, such as Edgar Albino (10th), Anthony Streib (5th), and Caleb Nobiling (7th), while relying on senior leadership from veterans Evan Vazquez and Briar Russell. The newcomers, Gavin Hanrahan and Ben Vazquez, are making a huge impact as well. Nearing the end of the season, the team won regionals and 12 wrestlers qualified for individual sectionals. Caleb Nobiling and Edgar Albino placed 3rd in state.

Dance
The Dance Team welcomed Antioch dance alum, Sarah Owen, as an assistant coach this year. The team won 1st place at their first competition of the season at Mundelein and earned a 2nd place finish in conference where Alexis Barbosa earned the NLCC Sportsmanship Award. The dancers placed 3rd at sectionals last week and are the first winter sport to qualify for state. This past weekend the team finished 13th in the state!

Gymnastics
D117 gymnastics shattered the school record with a 135.5 and are continuing to break multiple individual personal records throughout the season. Senior night was a success with the girls celebrating and sending the seniors off in style.

Girls’ Bowling
The Girls’ Bowling Team has won all of their conference matches, except for one, earning them the title of regular season conference champions. This year, at their invites, they have placed second and third multiple times. At the end of January, the varsity girls won the conference tournament championship, and took home the team regional championship and Allyssa Tanner was the overall individual regional champion and qualified for state.