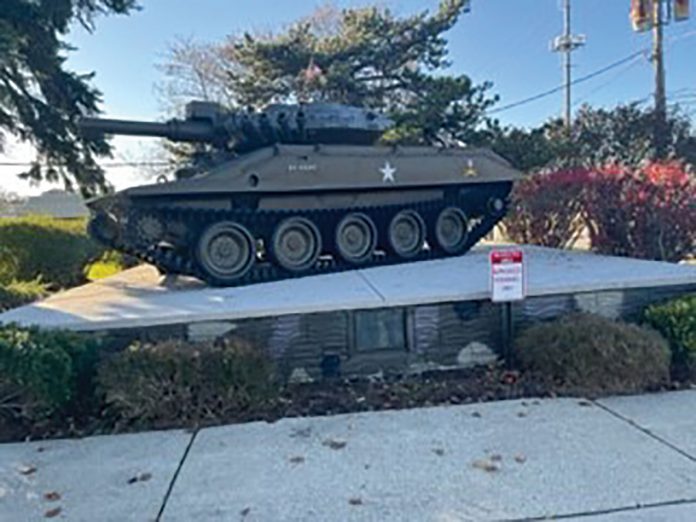 For former Antioch Village Board member Jay Jozwiak, restoration of the veteran’s memorial at Toft and Orchard has been on his mind for years.  Earlier this year, Jozwiak, who serves as the Commander of the Antioch American Legion Post 748, brought a group of volunteers together to make the restoration a reality.

The tank memorial has been in place since 1994 when the United States government donated a Vietnam-era M551 Sheridan Tank to the Antioch VFW.  Local, state, and federal officials worked together to secure the tank, including former State Senator Adeline Geo-Karis, State Representative Robert Churchill, and Congressman Phil Crane.  The tank was delivered and placed on the concrete slab in December 1994.  The memorial was dedicated the following spring, on Memorial Day.  Dignitaries attending the spring dedication included then Illinois State Treasurer Judy Baar Topinka.

This past summer, Jozwiak enlisted the help of other local veterans, veteran groups, and local businesses to help with a restoration project of the tank.  The group of volunteers spent about 300 hours working to power wash the tank, sand it, prime and paint the exterior, and repaint the tank’s tracks and rims (a very tedious job!).  The group finished the first phase of the restoration of the tank shortly before Halloween.  The group is already planning Phase II of the project, which they expect to begin in Spring 2023.  The next phase will involve making improvements to the area surrounding the concrete base and adding memorials to honor veterans from the Antioch area who gave their lives in combat.  The current memorial honors those who died during World War II.

Donations are being accepted for the next phase of the renovation of the memorial.  Donations can be made to the Antioch American Legion Post 748, 75 West North Ave, Antioch, IL, 60002.