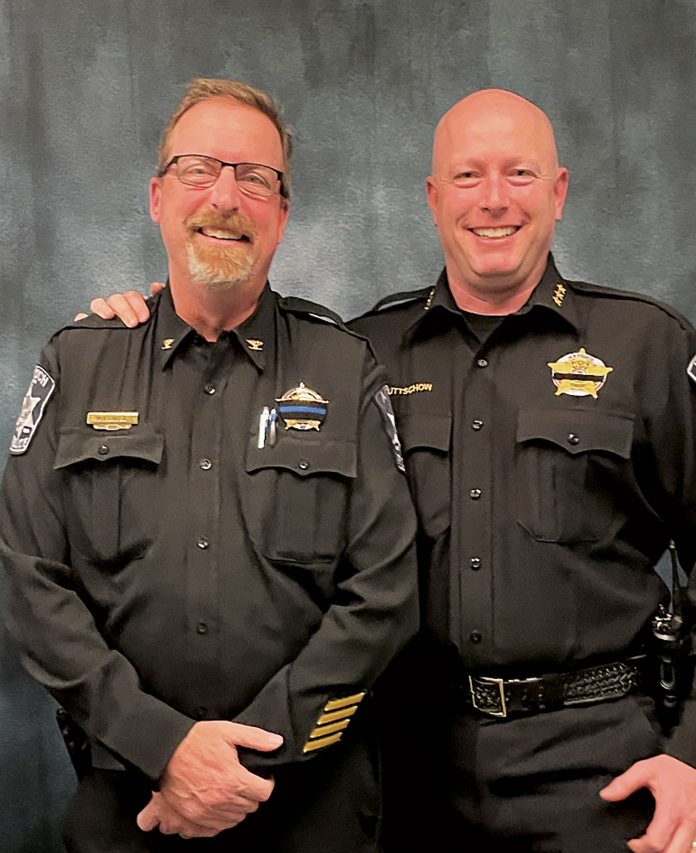 After serving the Antioch community for the past 23 years as a member of the Antioch Police Department, APD Commander Aron Fendel is retiring. Commander Fendel began his career in Antioch in 1999 as a patrolman. Before being hired by the APD, Fendel served our nation in the United States Air Force from 1989 until 1997. Throughout his career with the APD, Commander Fendel has served in numerous capacities including Field Training Officer, Juvenile Officer, Detective, Patrol Sergeant, and Administrative Sergeant before being promoted to his position as the Commander of Support Services.

Service and dedication to the Antioch community have not only been a passion for Commander Fendel but it’s also been a family affair! Whether it was Shop with a Cop, parades, or other community events, you would likely see some or all the Fendel family out volunteering their time. Commander Fendel’s wife Sara has spent the past 28 years as a teacher at Antioch’s Faith Lutheran School. She has accepted a call to serve at another school in the Appleton, Wisconsin area this fall. The Fendel family will be relocating to northern Wisconsin.

As a Field Training Officer with the police department, Commander Fendel had great satisfaction in being able to contribute to the development of his fellow officers as they begin their law enforcement careers.

“It’s been great to train somebody as they are first hired,” said Fendel. “I’ve been able to work with many of our officers as they were just beginning in law enforcement. It’s been extremely rewarding to see them grow as officers and individuals as they come up through the ranks.”

In 1999, Commander Fendel and Antioch Police Chief Geoff Guttschow were hired as entry-level police officers by the Village of Antioch on the same day. Both went through the police academy together. They’ve worked together for nearly 23 years.

“I don’t feel like I can adequately express the respect I have for Aron, both personally and professionally. We grew together in the organization. We have been at each other’s side for over two decades. It has been such a pleasure and honor to call him my friend and colleague,” said Chief Guttschow. “Aron has been instrumental in helping lead the department through some of our most significant challenges, especially during the events of the past couple of years.”

Thank you for your service to our community, Commander Fendel!

What do you love about Antioch?
I liked the small-town feel. The people of Antioch in general are very supportive of the Antioch Police Department.

Is there a particular memory or event that will stick with you in retirement?
There are too many memories or events to narrow it down to one thing. However, I would have to say being surrounded by great people, passionate about the job and the people they serve will be foremost in my mind. So basically, I would say my fellow officers made a positive difference in all that I had done throughout my career.

What was the most rewarding part of being a member of the Antioch Police Department?
I believe the department makes a positive impact on the community and has a great working relationship with its citizens and businesses. I really enjoyed the community outreach our agency does. Especially the “Shop with a Cop” program. It was re-energizing to see the direct, and positive impact we had on children and their families.

How has law enforcement improved during your time as an officer?
Our agency has made tremendous strides in how well the officers are being trained especially in dealing with mental health issues. We are also better equipped to deal with a multitude of things that officers may deal with daily.

What do you believe is your biggest accomplishment?
I have had several personal accomplishments throughout my career. I hope I have left a positive mark on the department and community through my efforts as a Field Training Officer and later as a supervisor. Those I have been a part of in their training or have overseen that remain a part of the Antioch Police Department are productive and positive influences in the community.

What are some things you are going to miss the most?
It’s all about the people. I am going to miss my fellow officers more than anything.