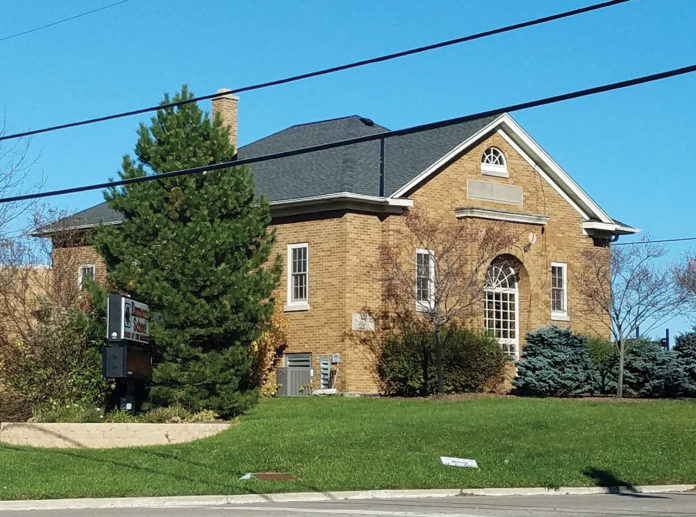 This year Emmons School is celebrating its 175th anniversary! It was established in 1844 as a subscription school. The first Emmons School was located on what is now the southeast corner of Beach Grove Road and Route 59. Myron Emmons (1805-1893) migrated to Antioch two years prior from Caughdenoy, New York, and settled on a farm of 440 acres. Myron donated a portion of his farm for the original schoolhouse.

Six families worked together and built the initial building that was made of lathe, plaster, and oak lumber, materials that were family donations. The schoolhouse was one room measuring 16 x 24 feet and was heated by a wood burning box stove.

The very first teacher at Emmons School was Mr. Miller, followed by Mr. White. They earned twelve dollars per month for teaching the students. Each family took turns housing the teacher. The length of time that the teacher stayed with each family depended on the number of children that family had enrolled at Emmons.

After some time, it was determined that the Emmons land was too low, so in 1870 land for a new site was purchased from John and Josephine Grimm for the price of twenty dollars. The schoolhouse was relocated to the new site directly across the road from where it had been originally built, the land was returned to the Emmons family.

The building was remodeled in 1916 at a cost of $900, yet was not considered a standard school. The heating and drinking water system were far below the necessary requirements. Since there was no well on the grounds during the 1920’s, the teacher, Ida (Runyard) Kufalk, carried water from her parents’ farm across the road. The teacher was also responsible for starting the fire in the morning as well as cleaning the school.

During the summer of 1934, a new brick schoolhouse was built on the site. The brick structure had an oil furnace, boys and girls cloakrooms, indoor flushing toilets, a library, and a teacher’s room. This new building won the “Superior School” award because of the modern facilities. The former frame structure was sold and moved to the Nielsen Corner and became part of their restaurant.

Emmons remained a one-teacher school into the 1950’s. The current school was built during the summer of 1994. The one room brick schoolhouse built in 1934 remains in use today.

Emmons will be marking this momentous anniversary by planting a new tree and plaque on the school grounds. Emmons School is proud to have had 175 years of learning and is looking forward to what the future brings!