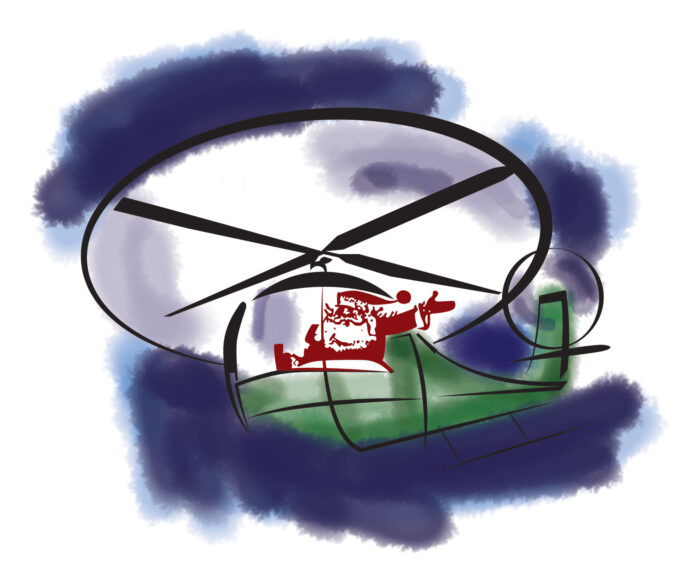 When many of us think about Christmas, we think large celebrations and countless holiday traditions. In actuality, Christmas in Illinois, historically, was rather low key.

According to journals from those living in the French town of Kaskaskia in the 1700s, a town along the Mississippi River in southern Illinois, residents would head home after Christmas Eve services to their fireplaces and use bed warmers (pots with coal) to take the chill out of their beds. A rather simple and everyday routine with not much fanfare for the eve of a holiday. Goods sold in shops showed many things imported from France along with a mix of locally-made items. Holiday gifts for boys were thought to be silver knee buckles, which would fasten pants at the sides, and for girls, hair ribbons from Paris. Otherwise, most of the merriment was saved for New Year’s and the twelfth day of Christmas (known as Epiphany Eve) instead. As towns grew and others were formed, with more residents, industry and resources, so too, did bigger and grander celebrations come.

Christmas trees and other traditions date far back, with each country and culture lending its own displays and features. For example, in the 15th century European country of Latvia, young men and women would dance and sing around trees during winter celebrations, then set the largest tree on fire during the last night of gatherings to light the sky. The 1600s brought about the first decorated tree, and in 1816, the first American tree. In 1883, Illinois’ own Sears Roebuck & Company was the first to introduce an artificial Christmas tree. Their trees would sell from 50 cents to a dollar, small to large in size.

We can thank President Ulysses S. Grant for helping us all to have an official holiday to celebrate and elevating the season. This one-time Galena, Illinois resident signed a proclamation making Christmas a national holiday in 1870. Early community celebrations here in Antioch date back to 1887, with the earliest tree lighting documented as being held on Christmas Eve of that year.

Notable Firsts
The notable-first holiday tree was documented in the journal of Frank Simmons, an Antioch resident and farmer, who came to the area in 1841 with his parents. Prior to a formal newspaper being published (which came about in 1888), Frank would journal and keep records of mostly things on the farm, but also things going on in town. For one night only, Frank wrote, on Christmas Eve, candles would be lit on the tree for everyone to come and see. He goes on to write on December 25, 1890, about how the celebration expanded, “A Christmas tree at both churches last night.” The churches he refers to would have been the Disciples of Christ Church, now the Lakes Region Historical Society on Main Street, and the Baptist church which stood approximately where the Wesley Hall addition to the later Antioch United Methodist Church now stands. It is presumed that this annual, single-night tree lighting continued well into the 20th century. Later, a formalized tree ceremony came into place, and other activities, such as visits from Santa and the parade were added. Over time, the parade and tree lighting have grown to one of the most popular events for residents.

For many, a very recognizable tree of the grandest scale is the one that appears in Rockefeller Center in New York City. The tradition of the large tree came about in 1931 after one was placed on a construction site by demolition workers that pooled their money to purchase a 20-foot balsam fir and decorated it with handmade garlands. From there, the tradition grew, literally, with trees vying for the once-a-year selection and to be displayed at this popular destination for visitors and travelers. The tree tradition and lighting continue today.

In comparison, today’s Village of Antioch Christmas tree is relatively new and more demure in stature than the Rockefeller one. However, it is truly grand in its spirit and symbolism. The Norway spruce was planted at Village Hall as a replacement for the one that became in poor health. It displays about 1,600 lights and is ceremoniously lit each year with a “flipping” of the oversized switch. The lighting, along with accented strung lights along Main and Lake Streets, create a beautiful picture of holiday cheer and a sense of community. Lights are displayed from Thanksgiving to after Christmas.

In 1984, what was known as the new “Santa’s Enchanted Castle” came about, a creatively-designed portable North Pole-esque structure. The “ho, ho, ho” holiday go-to served the Village of Antioch community over the years with countless toy lists and visits to Santa. Mayor Hanson, in his early years, dedicated his time and talents to the Village and Antioch Chamber of Commerce by helping with the construction and design. The structure was retired in recent years with the growth of other options, including Santa’s Frozen Village, which is hosted by the Antioch Chamber of Commerce and this year’s Antioch Parks Department’s very special Holly Jolly Drive-Thru (get details at antioch.il.gov).

When asked to share some insight on Christmas and the holiday season in Antioch, with a look back in history, local historian, Ainsley Brook Wonderling, had some interesting thoughts. Ainsley serves as the manager and operator of the Lakes Region Historical Society, charged with preserving the rich history of Antioch, the Chain O’Lakes, and surrounding areas.

“One of the things I remember growing up was that Santa came in on a helicopter. It was quite exciting; even just the helicopter itself, the noise and the flying overhead,” said Ainsley. Going further back, she recalls stories that her family would share of residents gathering near the church, for a tree lighting. “It was always about the feeling of togetherness.”

She mentions how many communities would always have men from the town standing by with water buckets (like an informal fire department) during festivities, as a “just in case” should a problem from lighted candle decorations develop. It seems likely the fire department’s introduction to the holiday festivities was more out of necessity (from stopping the town from burning) than the present-day ridesharing of Santa.

The Lakes Region Historical Society (museum, meeting house and archive locations on Main Street) are free and open to the public. They are all currently closed for winter and will reopen in the spring with expanded hours. Hours also available by appointment. For more about this local gem, reopening dates, special events and stories of old Antioch, follow them on Facebook. Consider a donation to this valuable non-profit with your year-end giving plans.

Wishing you all a joyous, safe and healthy holiday season.