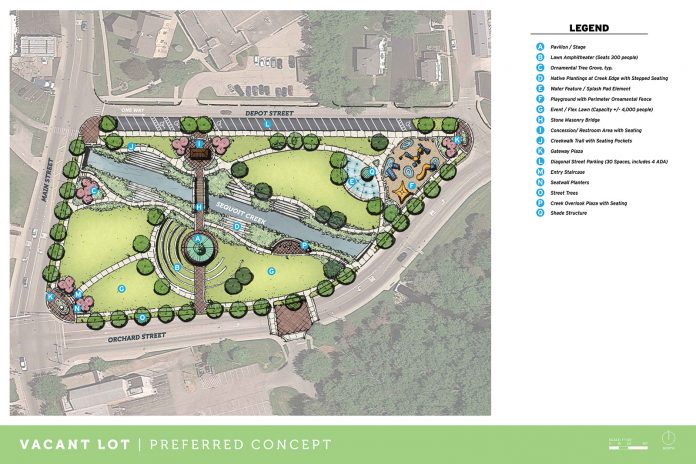 The current history of this area began about 50 years ago when an approximate 900-foot section of the Sequoit Creek that ran through the 3.5-acre site was fitted with a 102″ metal culvert and was buried to make way for a commercial auto dealership development.

Over time, the property surrounding the culvert was vacated of commercial uses, and the buildings that once occupied the land and surrounding area were removed.

Beginning in 2016, the culvert began to fail, creating sinkholes.

By 2019 the culvert had failed and impaired the flow of the creek, presenting both a general flooding hazard for downtown and a threat of flooding for upstream properties. The Village mitigated the potential for flooding by opening the creek and removing most of the metal piping.

In 2021, after acquiring the remainder of the property in the project area, the Village engaged the Lakota Group, a planning and landscape architecture firm, to seek the Antioch community’s feedback as to the final use and redevelopment of the property. With community input, the Lakota Group has produced a detailed conceptual plan for the redevelopment of the property as an open space with an exposed or daylighted Sequoit Creek, with appropriate flood mitigation attributes and other attractive programming and park features.

What is going on now?
The Lakota Group and Strand Engineering presented its design and engineering proposals to the Antioch Village Board in January of this year. The proposal was unanimously approved by the Village Board. The project now has moved to the engineering phase. Work has already started to secure the required permits needed for the project. Once the Village is permitted to break ground, construction will begin immediately.

2022-2024
Early 2022 has been busy with engineering and permitting work for the project. The first visible signs of construction could begin in late 2022.

Construction along the creek and major construction milestones will occur in 2023, with the grand opening of the redeveloped site expected sometime in 2024, if not earlier. Once complete, the site will become a major gateway and anchor to Downtown Antioch and an important new hub of Village life.

Note: The final concept plan was designed by the Lakota Group and approved by the Antioch Village Board. This concept plan provides a framework for the next step in the design process, where the details of the plan are finalized. Some elements of this conceptual plan could change as the design work progresses.