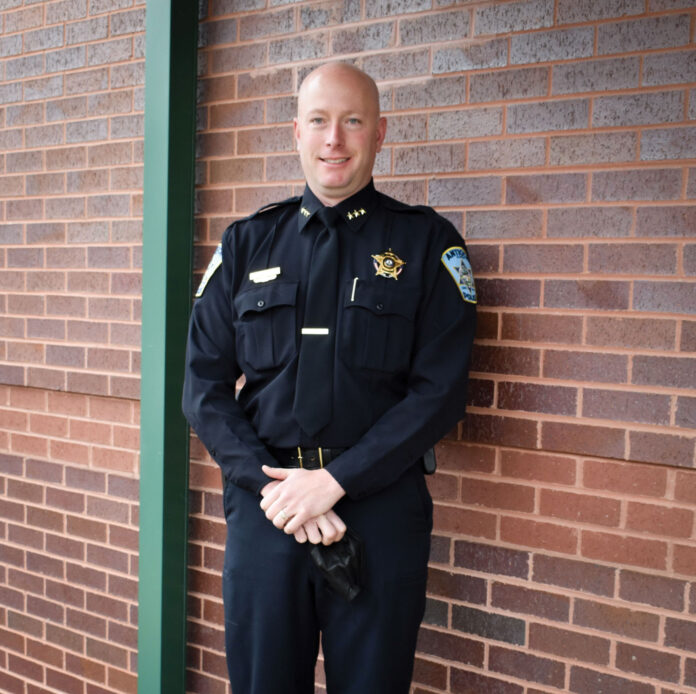 Village of Antioch Chief of Police

Appointed August of 2020, after serving as Interim Chief since March

In your own words…
Antioch is an amazing community that I have had the honor and privilege of serving in for more than two decades. I began my career with the Antioch Police Department in 1999, as a patrol officer. I served in several capacities before being promoted to sergeant in 2007, when I began the supervisory chapter of my career. I have always believed that community problems are best addressed when we all work together. Because of this, I have strived to expand engagement and partnerships between the men and women of the police department, and the community we are sworn to serve. My policing philosophy is based on balancing a foundation of traditional policing concepts with modern progressive methods. I am committed to listening to the needs of the community and believe in providing the highest level of professional public safety service.

It might surprise you to know…
I served as a volunteer emergency medical technician in Salem, Wisconsin for three years prior to becoming a police officer. It was through this experience I began to understand that I had a servant’s heart. Helping people and serving my community provided me an inherent sense of reward. This experience helped lead me toward a career in law enforcement. In furthering my desire to serve my community, I have had the privilege of being an elected member of the Community High School District 117 Board of Education since 2014.

Favorite memory about the community
I have always enjoyed participating in Antioch’s Independence Day Celebration. It is by far, the most popular annual village event which brings the community together in unity. This event provides an opportunity to directly engage community members and as a result I have always enjoyed the deep sense of community the event fosters. It always reminds me that the level of support our community has for their police officers, is second to none.

Favorite Sports Teams
I am not a diehard sports fan by any means. That said, having been born in Illinois but raised in Wisconsin before settling in Antioch to raise my family, I developed a mixed batch of sports teams I am a fan of.

Favorite Free-time Activity
My family (wife and five children) have enjoyed the “Chain life.” During the warmer months, if we are not out on the lakes, we are sitting on our deck watching the boats pass by.

Favorite Movie
Any of the James Bond movies and Spaceballs.

Favorite Quote
This quote by Theodore Roosevelt hangs on a large sign in my office and reminds me each day that it is better to try and fail, rather to not try at all because of the fear of failure.

“It is not the critic who counts; not the man who points out how the strong man stumbles, or where the doer of deeds could have done them better; the credit belongs to the man who is actually in the arena, whose face is marred by dust and sweat and blood, who strives valiantly; who errs, who comes short again and again because there is no effort without error and shortcoming; But who does actually strive to do the deeds; who knows great enthusiasm, the great devotions; who spends himself in a worthy cause; who at the best knows in the end the triumph of high achievement, and who at the worst, if he fails, at least fails while daring greatly, so that his place shall never be with those cold and timid souls who neither know victory nor defeat.”

Greatest Lesson I’ve Learned
My wife would tell you, the most important lesson I have learned is she is always right.

However, as a law enforcement leader the most important lesson I have learned is that I must always be willing to embrace change. When I started my law enforcement career, we hand wrote reports, there were not computers in squad cars, and we did not have tools such as patrol rifles, dashcams, defibrillators, tasers or kinetic energy impact devices. Most officers did not own cellphones and the internet was in its early stages. Today, most police officers could not imagine doing the job without these valuable tools, but when they began to emerge in policing, many officers at the time were reluctant to embrace them.

Contrast this to the private sector, where companies have always actively sought out change to remain competitive. I believe policing should follow the many examples set by successful, private sector organizations. While change in policing is not always easy, I believe as law enforcement we must recognize the world is constantly evolving around us. To succeed in our mission, we must be willing to evolve with it. Change makes us better; it helps us ensure we stand ready to provide the highest level of professional service possible to those we took an oath to serve and protect.