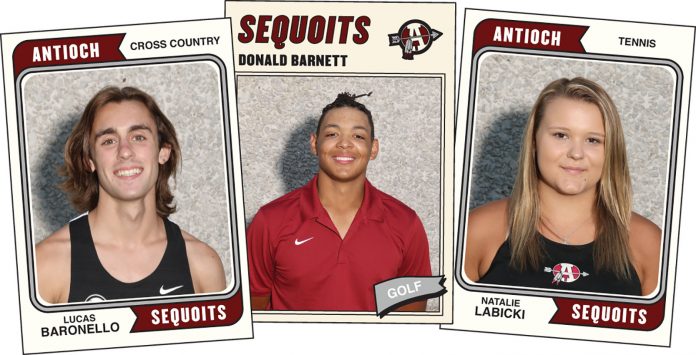 This fall ACHS had three athletes qualify for state in their respective sports.

Donald Barnett of the Varsity Boys Golf team had an incredible junior season this fall. He started off the season placing first in the Elmhurst College Showcase. He then went on to place 2nd at the Roger Alm Invite and 4th at the McHenry Invite. His postseason accomplishments began with a 5th place finish at conference, a top 10 overall finish at regionals, and a top 10 individual finish at sectionals which led to a trip to the state finals. According to Donald, “It was my goal to play well all year to qualify for state. I am proud of my efforts this season and I look forward to doing even better next year.”

Natalie Labicki of the Varsity Girls Tennis team capped off her senior season with her third trip to the state finals. Natalie finished in the top 3 at four invites this fall, including 2nd place at the Cary Grove Invite, 1st place at the Ram Invite, 3rd place at the Lakes Invite, and 1st place at the Spirit of the Northwest Invite. Her postseason achievements include a 2nd place finish at the Northern Lake County Conference Tournament as well as a 4th place finish in singles at Sectionals. Natalie also earned the program’s Most Valuable Player award and Coach D’Andrea had this to say about her, “Natalie is a fierce competitor whose hard work and dedication to tennis and to our program has been invaluable; I’m so proud of all she has deservedly accomplished this year and during her 3 years at ACHS.” We look forward to celebrating more student-athletes as the school year continues.

Senior cross country runner Lucas Baronello is having his best season as a Sequoit. Three weeks ago he placed 6th in the NLCC championships, leading the team to a 3rd place finish in the conference championships. His performance secured his fourth consecutive all-conference honor in cross country, a feat only achieved by 1 other Sequoit in the past 15 years. He followed that up with a 17th place in the IHSA Regional meet, helping the team in qualifying for the sectional meet held at Woodstock North. Last week he accomplished his #1 goal by qualifying for the IHSA state championships to be held this weekend in Peoria.