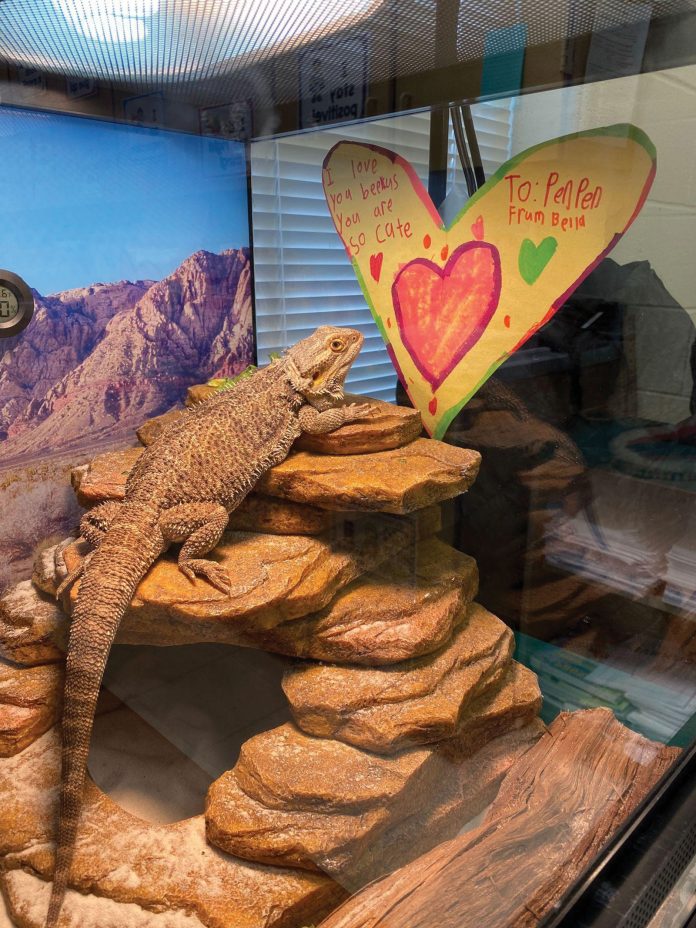 Penelope (Pen-Pen) is a 2-year-old bearded dragon that was adopted by 1st grade teacher Kristan Owens over Winter Break and has become a beloved class pet. Before introducing Pen-Pen to the class, they completed a week-long unit on bearded dragons. The kids got so excited learning about them that Mrs. Owens had three parents reach out to her saying their children were begging them to get a bearded dragon as a pet. At this point, the parents of the classroom knew that Penelope was coming but the students had no idea.

On January 10, students came into the room, met Penelope and fell in love! Penelope loves being able to watch the students learn, and even positions herself in her terrarium where she can see them. When the students leave the classroom, she goes back into her hammock to rest. Once Penelope became a permanent member of the classroom, students began mimicking her mannerisms during their play time by doing the “beardie head bob” (show of dominance) and the “arm wave” (show of submission). They have even started a classroom chant in her honor, and randomly break out into “pa-pa Penelope!”

Now, Mrs. Owens’ students cannot wait to purchase “snack time with Pen- Pen” as their favorite PBIS store prize, and are working towards increasing Penelope’s “roam time” in the classroom so she can become a reading buddy during center time. Recognizing that being a pet owner carries responsibility, the children help Mrs. Owens give Penelope a bath during play-time. They also love to draw pictures and make cards to decorate the outside of her terrarium. Although Shelly, the turtle across the hall in Miss Pantke’s room, has reigned as the celebrity of sky blue village, it is clear to see that Penelope has become a true Hurricane rock star, adored by fans near and far.